What if we had proof of Atlantis? How would that change our view of the world and our view of human history? Imagine 6,000 years of Dark Ages between the end of one civilization and the start of our own history.

We have a great deal of evidence in support of the past existence of Atlantis. We even have strong evidence that may well be proof of the Atlantis event—9620 BC. Sadly, many scientists refuse to look at evidence because it might jeopardize their careers. Is that how science is supposed to be done—ignoring evidence to protect careers? We think not.

Proof of Atlantis provides the reader with a startling array of evidence that could one day prove the existence of Plato’s lost island empire. This groundbreaking work is a must-read for anyone interested in the integrity of science and in the story of humanity’s past.

Before You Buy, Note: When you return for your download, the password will be in the page address. Example:
…proof-atlantis-download-xxxxxxx/?password=XXXXXXXX&amt=2.99&cc=USD&item_name=

Or purchase from one of the big outlets for $3.99

Why the difference? You get a discount because buying here pays us directly. When you buy through Amazon, Apple, Barnes & Noble, Kobo and Smashwords, we don’t get paid for weeks or months. But you have options. Click on the following link for your favorite retailer:

Proof of Atlantis is currently available in paperback format. Click on the cover for larger view. Cover subject to change without notice. 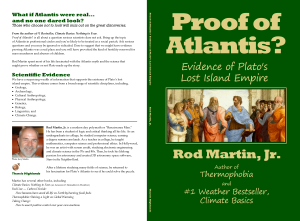 Buy Proof of Atlantis in PAPERBACK format at Amazon

Evidence of the Atlantis Event

Evidence from three different scientific disciplines all point to something big happening 9620 BC. What was it? Were there three separate events, or were they related? And could they be related to the island which supposedly sank at the same time?

Evidence of a Geological Disaster

The Earth looks heavily damaged at every point related to Atlantis and the tectonic boundary where it was supposed to reside. This book gives a compelling look at the geology of the region and delivers a primer in geological science so the reader can understand the forces at work—not only the forces which created Atlantis in the first place, but also the forces which led ultimately to its disaster.

Clues in Egyptian and Greek Myth

How would you describe technology as far ahead of us as is our modern technology ahead of the builders and technicians of Plato’s day? What if primitive hunter-gatherers saw things they could not put into words? What if they didn’t have the vocabulary for such things? Proof of Atlantis explores the myths of Ancient Greece and Egypt for clues that may well reveal the prehistoric influences of Plato’s lost island empire.

How Cro-Magnon Landed in Western Europe

Forty thousand BC, an advanced form of man appeared in Western Europe. This was Cro-Magnon man. Where did he come from? Why wasn’t their evidence of his passing through North Africa or through Eastern Europe? In science, we’re taught not to jump to the easiest conclusion until we’ve done extensive research into other possibilities. Sometimes, however, the easiest answers were right after all. Could the sudden appearance of several waves of humanity, each with a toolkit newer than that possessed by the previous wave, mean that their source was nearby, but to the West of Eurasia and Africa?

Facts Plato Got Right About Science

Twenty-three centuries before the science existed, Plato gave us clues about Atlantis that remain consistent with today’s science. How is this possible? He could have gotten lucky multiple times, or his story could hold a large measure of truth in it. As a good scientist, we need to restrain ourselves from jumping to hasty conclusions. Several items that Plato got right are discussed, including,

Before You Buy, Note: When you return for your download, the password will be in the page address. Example:
…proof-atlantis-download-xxxxxxx/?password=XXXXXXXX&amt=2.99&cc=USD&item_name=